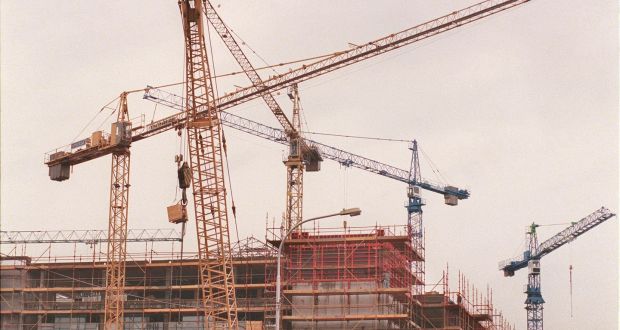 While the rate of growth eased to a three-month low, overall Irish construction activity has increased on a monthly basis since September 2013.

Irish construction groups experienced solid but slower growth in January as the industry grappled to deal to meet demand for housing.

While the rate of growth eased to a three-month low, overall Irish construction activity has increased on a monthly basis since September 2013.

The housing subcategory recorded the fastest rise in activity of the three monitored sectors with new orders continuing to rise sharply on foot of improving customer demand since the start of 2019.

New business has now increased in each of the past 67 months, with the rate of growth quickening from December.

In contrast to the quicker rise in new business, employment growth in the Irish construction industry eased to a four-month low during January, Ulster Bank said.
Strongly positive

Business sentiment, however, improved to a three-month high during January and was strongly positive with nearly half of panellists predicting a rise in activity over the coming year.

Commenting on the survey, Ulster Bank chief economist Simon Barry said: “Housing was the fastest-growing category in January, with this important subsector recording ongoing solid expansion, albeit at a somewhat less rapid pace than earlier in the recovery.”

“Last week’s completions data from the CSO showed that new home construction rose by 25 per cent last year, with the full-year total of around 18,100 units completed representing a nine-year high.

“Early-year trends in the housing PMI – as well as the signals from other indicators - are consistent with further improvements in housing supply in the coming year,” he said.

New orders continued to rise sharply with firms reporting an encouraging improvement in client demand at the beginning of the year, Mr Barry said. “In turn, the ongoing expansion in actual and prospective activity is continuing to underpin employment in construction.”